Stephen Lee, 16, was assigned to the American Red Cross of Southeast and Coastal Georgia as part of the Savannah Pre-Apprentice Program. This is the Savannah Arts Academy junior’s first year in participating in the SPAP.

Lee was responsible for the staff’s graphic design duties. Some of his tasks included constructing selfie frames for the 2016 volunteer appreciation awards and redesigning the layout of award certificates previously used at the event.

He also used his computer to color-code the Disaster Action Team map. This map will be used as a recruitment resource for the 37 county area his office serves. Lee’s efforts made it easier for his team to determine the amount of volunteer responders needed in each county.

“I really enjoy it,” said Lee. “They are giving me a lot of work — not in a bad sense, but in a good sense…It’s honing my graphic skills.” 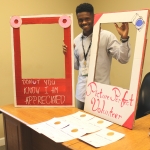 Lee used a variety of different soft skills and service skills learned during sessions at the SPAP Base Camp. He said one of the most important skills he learned was the art of communication and use of good body language. He also learned how to interact with supervisors and how to accept constructive criticism.

American Red Cross of Southeast and Coastal Georgia also allowed Lee to participate in various organizational training sessions. He was trained in intake management in order to adhere to American Red Cross’s standard for processing and acclimating new and potential volunteers. He also completed customer service training in order to appropriately format emails and how to complete background checks.

SPAP gave Lee his first chance at working in an office setting. Despite being a first-timer the “laid back” staff made him very comfortable in his new environment. He hopes to participate in SPAP again in 2017. 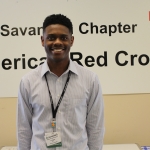 “The Pre-Apprentices program is a really good program and it needs to be recognized more in Savannah,” said Lee. “If I didn’t join the SPAP program this summer, I would probably be home on my couch and my phone doing nothing,” said Lee.