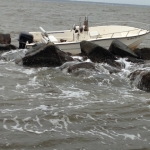 At about 11:25 a.m. Marine Patrol officers were dispatched to sound between Dafuski Island and the Savannah River, where the boaters sought refuge on large rocks. Strong waves pushed their vessel into the rocks causing it to take on water.

Metro’s Marine Patrol safely retrieved the three men and transported them to the President Street Boat Ramp. No injuries were reported.