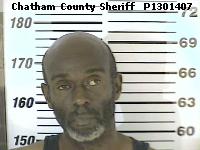 SAVANNAH, GA (February 5, 2013): Downtown Precinct detectives have charged a convicted felon who was transferred to Savannah to complete his prison sentence with a felony and two misdemeanors after videos helped identify him in various thefts.

Anthony Gerard Hatten, 49, has been charged with felony financial transaction card fraud and misdemeanor theft of lost or mislaid property and possession of drug related objects by Savannah-Chatham Metropolitan Police detectives from the Downtown Precinct.

Hatten is from Waycross where his previous criminal arrests took place. His record shows 11 incarcerations, including a 2010 theft conviction for which he was sentenced to five years in an Augusta prison. He was released in August after serving 16 months and transferred to the Coastal Transition Center in Savannah. He was released from the Center and started state probation in November.

Downtown detectives developed an interest in Hatten after a purse was reported missing from a Bull Street business. A few days later a theft was reported by a downtown business describing a suspect matching his description.

Days later the same detectives stopped Hatten and found a wallet in his possession containing transaction cards belonging to a Savannah woman. Videos from one of the stores where the card was used show him conducting the transaction.

Detectives continue to investigate possible connections to other crimes.