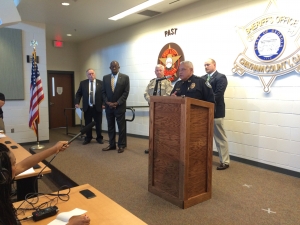 This action was part of a six-week national fugitive apprehension initiative called Operation Violence Reduction12.  As a part of this initiative, the Deputy Attorney General of the United States designated Savannah, Georgia as one of the twelve “focus cities” of the national effort.

From February 1-March 11, 2016, this apprehension action in Chatham County, Georgia and surrounding areas resulted in the arrest of 144 fugitives, including gang members, sex offenders, murder suspects, and other violent criminals that were wanted by the  U. S. Marshals, SCMPD, CCSO, and other SERFTF partner agencies.  In addition to the fugitives arrested, approximately 177 violent felony warrants were cleared.

SCMPD Chief of Police Joseph H. Lumpkin, Sr. said, “This effort shows what we can do with cooperation on a state, local, and federal level.  We cannot continue to let armed criminals return to the street after serving only a minute part of their sentences. The Savannah-Chatham Metropolitan Police Department will continue to build strong cases and the US marshal will continue to help us take these murders off the street. These are people who continue to violate of our citizens.”

Chief Lumpkin also highlighted four SCMPD cases in which the Marshals were able to make arrests: