UPDATE: On June 14, 2017, Victor Natson, 26, was arrested on a charge of conspiracy to interfere with interstate commerce by robbery in connection to the January attempted armed robbery of two Brink’s security guards. Natson, who worked at Brink’s prior to the incident, was identified as an additional suspect during a continued investigation into the case. 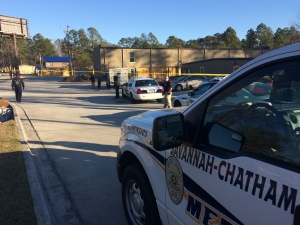 At approximately 3:20 p.m. on Monday, January 30 two armed men tried to rob and hijack two Brink’s security guards in an armored truck. The armored truck was parked at Bob’s Storage near the 10900 block of Abercorn St. near the Truman Parkway.

During the attempted robbery and hijacking one of the security guards shot both suspects. Both suspects ran away.

Thanks to assistance from the Brink’s security guards and local citizens, police were able to quickly apprehend one of the suspects at a nearby apartment complex.  Minutes later the second suspect showed up at the hospital and was taken into custody.

Both suspects remain in the hospital with non-life-threatening injuries. No one else was injured.