Zion Afolavi and Hope Robbins, both 15, work side-by-side in the City of Savannah’s Research and Budget Department, their mutual Savannah Pre-Apprentice Program assignment. The duo worked together so well that they were able to finish each other’s sentences before their Summer 2016 SPAP assignment ended.

Typically, Afolavi and Robbins handled clerical tasks such as filing, that are often time consuming. However, it did not take them long to realize that working together moved the process along more quickly and efficiently. They altered their initial filing process so that one apprentice read file names and new filing categories, while the other typed and electronically stored files. Both girls say this is an example of “work[ing] smarter, not harder,” a

lesson they learned during professional development sessions at SPAP Base Camp.

These teens learned many essential skills during weekly SPAP Base Camp visits. In addition to effective teamwork, they learned about workplace etiquette, multitasking, interacting with supervisors, keeping a positive attitude, practicing responsibility and being consistent. They believe they will need these skills throughout life. Robbins, an aspiring lawyer, said, “Learning how to work in an office setting will help me later on in the future.”

Afolavi wants to become a doctor, and said the Research and Budget staff was always really nice, which helped her to come out of her shell. 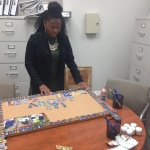 ther duty given to these apprentices was to create a brag board, highlighting goals and accomplishments of each Research and Budget staff member, including themselves.

SPAP gave Afolavi and Robbins their first jobs ever. Both girls said they would love to rejoin SPAP and the City of Savannah’s Research and Budget team in 2017. They also are open to trying new employment opportunities through SPAP.