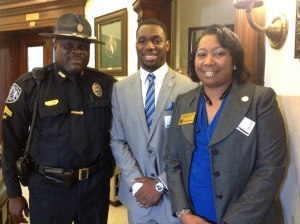 SAVANNAH, GA (April 16, 2015) – This afternoon the Savannah-Chatham Metropolitan Police Department and the Savannah City Council honored a heroic citizen who tended to three young children after they were ejected from a vehicle during a crash in Downtown Savannah. Assistant Chief Julie Tolbert presented Reggie Owens, 21, with the department’s Citizen Award of Commendation.

The wreck occurred at the intersection of MLK Jr. Blvd. and Gwinnett St. around 1:30 a.m. on April 4, 2014. The car was hit by a drunk driver. Owens, a South Carolina State student, was on his way home in Savannah to spend Easter with his family. When Owens came upon the wreck, he jumped out of his vehicle and ran to help.

The 8-year-old passenger who had been ejected walked behind car he had been riding in. Owens grabbed the boy out of way just in time; the driver of the vehicle was attempting to back up. Owens then tended to the 5-year-old and 2-year-old boys who had also been ejected during the crash.

“It was a last minute trip, it was all God to have me go that way and come home that night,” Owens said. “I stopped because I thought it was a natural thing to do, I wanted to see if I could help. When I saw young children it saddened my heart and raised the seriousness, I think it made me braver.”

All three boys have been released from the hospital.

Owens, 21, is the son of SCMPD Star Corporal Reginald Owens.

“We cannot begin to express how much we appreciate the actions of the Mr. Owens. He was in the right place and the right time and was able to save a child from further serious injury or even death. He also comforted those children until emergency personnel arrived on the scene. We are so proud of him and we know his father is proud too,” said Tolbert. “We always encourage community participation is assisting the police with improving public safety. It takes all of us working together to make this community a better place.”

Owen heroic actions were captured by a City of Savannah traffic camera and the video was shown to council this afternoon.