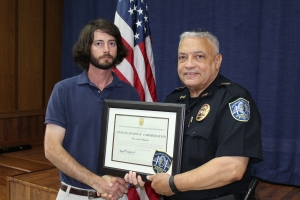 SAVANNAH, GA (May 16, 2016) – The Savannah-Chatham Metropolitan Police Department recognized a local citizen May 16 for his heroic actions that landed a violent suspect behind bars and likely saved a Savannah woman’s life.

On the night of April 28th, James Hughes was leaving work at the Savannah Botanical Gardens on Canebrake Road.  He looked around the parking lot before he left.  He saw something strange and as he got closer he observed a co-worker being attacked.  A man was hitting a woman in the head with a rock.

“It took a minute, but I could recognize someone was standing over her hitting her. I immediately called police,” Hughes said. “He came at me, jumped the fence, and charged at me.”

Hughes quickly checked on the victim.  She was hurt but her injuries were not life-threatening.  Then, despite the suspect’s aggressive actions toward Hughes, he followed the suspect to the Wal-Mart parking lot on Ogeechee Road and called 911.  The suspect got into a car and took off, Hughes followed as the suspect traveled southbound on Highway 17 toward Bryan County. Once the vehicle crossed jurisdictions, Richmond Hill Police spotted the car matching Hughes’ description and officers stopped the car.  The suspect got out and ran but was soon caught.

“We’re certainly glad you got involved and you couldn’t have done it any better,” Lumpkin said after the presentation. “That’s the shared responsibility we speak of. It’s better to have citizen’s participation. Your service was exemplary. We’ve taken a violent criminal off the street; he would have escaped without you.”

Hughes had a modest reply.  “I like to think anyone would have done the same thing,” he said.

The suspect has been identified as Jason Tillman, 16, who is charged with armed robbery, aggravated assault, criminal attempt at murder, criminal damage to property in the second degree and aggravated battery. He was transported to the Savannah Regional Youth Detention Center without incident. This case remains under investigation.