As officers were conducting surveillance in the area at approximately 1 p.m., they 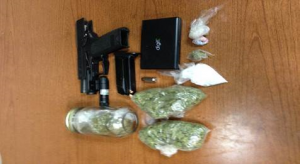 observed a vehicle make several traffic violations. As officers conducted a traffic stop of the vehicle, they observed the strong odor of marijuana.

Officers continued to investigate during the stop, a search yielded 3 ounces of marijuana, a bag containing several prescription pills, ecstasy and a stolen handgun.

The driver Antonio Gaston, 21, and the passenger Rashaad Murphy,

19, are charged with theft by receiving a stolen firearm, possession of a firearm during the commission of a felony and several narcotics offenses. Both suspects were transported to the Chatham County Detention Center without incident.