SAVANNAH, GA (June 29, 2016) – The Savannah-Chatham Metropolitan Police Department, Pooler Police and Port Wentworth Police are asking the public’s help in identifying a serial armed robber who is wanted in connection with more than a dozen

The suspect is described as a black male, approximately 6-feet tall and armed with a handgun. He has struck 15 convenience stores and hotels between Jan. 14 and June 22: six in the Savannah-Chatham Metro jurisdiction, eight in Pooler and one in Port Wentworth.

“We implore the community to help us identify this dangerous individual,” said Maj. Richard Zapal, commander of SCMPD’s Criminal Investigations Division. “He has terrorized employees throughout three jurisdictions during these armed robberies and it is imperative that we take him off the street before he hurts someone. He’s creating fear within the community and it’s our job to stop him. We hope someone recognizes him, his mannerisms or his clothing and calls 911.” 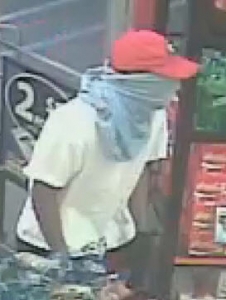 Information may also be forwarded to CrimeStoppers at (912) 234-2020. CrimeStoppers is offering a $2,500 reward for information that leads to the suspect’s arrest. Tipsters remain anonymous.