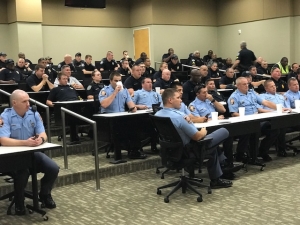 arly 1,300 people were affected by the latest wave of Operation Rolling Thunder.

Over three days, officers in the Thunder Task Force held nine road checks and conducted many traffic stops for traffic infractions. During the course of the operation,1,299 people received a warning, citation or were arrested.

Operation Rolling Thunder is conducted by the Governor’s Office of Highway Safety and brings police from across the state together for the common goal of decreasing the number of serious or fatal crashes.  It is the third time it has been conducted in Savannah. The operation, which concluded its third wave of activity over the weekend, cracks down on dangerous driving activities like speeding, distracted driving, seatbelt and child restraint violations and driving under the influence. Georgia State Patrol and Highway Enforcement of Aggressive Traffic (HEAT) officers came to Savannah to assist SCMPD officers in the effort.

Speeding issues were a close second during each wave. In the latest wave, there were 42 speeding warnings and 161 citations issued. All total, there have been 853 warnings or citations issued for speeding.

Operation Rolling Thunder will continue through the summer.