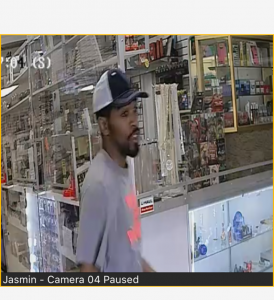 SAVANNAH, GA (May 9, 2016): Savannah-Chatham Metropolitan Police Department’s Robbery Unit is attempting to identify a man that robbed a convenience store on the 2700 block of Montgomery Street on May 9.

At approximately 8:30 a.m. the unidentified male entered the store and pretended to purchase items before approaching the cashier. At that time, the man brandished a firearm and demanded money. He was able to get away with an undisclosed amount of cash.

Detectives have obtained surveillance images of the man involved in the incident. He is described as a slim black male of a medium brown complexion. He appears to be in his mid-20s to 30s and has a mustache and goatee. During the incident he wore a black and white baseball cap, a grey t-shirt with pink lettering and blue jeans.

Anyone with any information may also call CrimeStoppers at (912) 234-2020 or text CRIMES (274637) using the keyword CSTOP2020. Tipsters remain anonymous and may qualify for a cash reward.