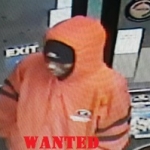 Metro responded to the scene in the 2500 block of Skidaway Road at about 9 p.m. Minutes earlier an gunman entered the building demanding cash from employees. Employees complied. The suspect fled with stolen cash and merchandise.

The suspect is described as a black male, in his early to mid-20s standing about 5-7 to 5-11. During the incident he wore a red or dark orange zippered jacket with an emblem on its left side, brown pants and black shoes. He left the scene on foot and was last seen heading north.