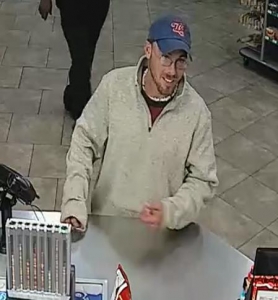 SAVANNAH, GA (February 14, 2017): The Savannah-Chatham Metropolitan Police Department’s Southside Precinct is asking for the community’s help identifying a suspect in a theft at a Parker’s on Wednesday, Feb. 8

Metro officers responded to the 7200 block of Abercorn Street at about 12:30 a.m. Reportedly, a suspect entered the gas station, asking a store clerk for a carton of cigarettes. Once the clerk set the carton down, the suspect snatched the items and ran out of the store. The suspect possibly fled in a white Mitsubishi Eclipse. No injuries were reported.

Investigators believe this same person may be responsible for several other thefts of Newport cigarette cartons at Savannah convenience stores.

The suspect is described as a white male in his mid-20s to early 30s. He 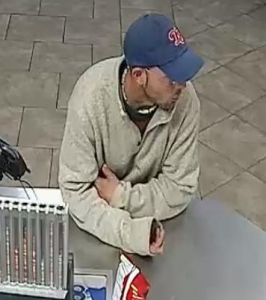 stands 5-7 to 5-9 and weighs approximately 140 pounds. During the incident, he wore a blue baseball cap with red wording, glasses, a grey pullover sweater and a red shirt underneath.

Any information regarding the suspect’s identity should be forwarded to the SCMPD tip line at (912) 525-3124.