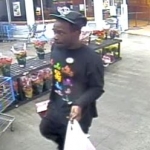 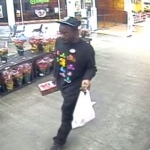 At about 4:13 p.m. Metro responded to the Walmart on the 6000 block of Ogeechee Rd, after reports of a vehicle theft. Surveillance footage showed the victim inadvertently leaving the keys to their 2014 Nissan Altima at the self-checkout counter. Moments later the suspect grabbed the keys and fled in a white 2008 Chevrolet Impala. The Impala was reported stolen from the 1100 block Mohawk Street at about 6:30 a.m. on the same day. Sometime between 11 a.m. and 3 p.m. the Nissan was stolen from the store’s parking lot, and remains at large.

The suspect is described as a black male in his mid-20s, with a dark complexion and a goatee. He stands roughly 5-9 and weighs about 160 pounds.