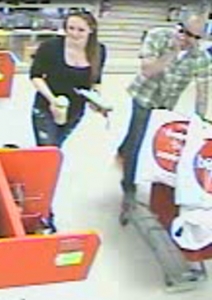 SCMPD obtained surveillance footage of the suspects and believe they may have ties to Effingham County.

One suspect is described as a white female in her early to mid-20s, standing about 5-6 to 5-8 and weighing about 125 pounds. She has long brown hair. During the incident she wore a black shirt and dark blue ripped jeans. The second suspect is a white male in his late 20s, standing 5-10 to 6-0 and weighing about 180 to 190 pounds. He is bald or partially bald. During the incident he wore a plaid button-up shirt and dark pants.