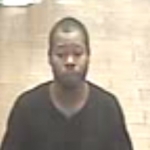 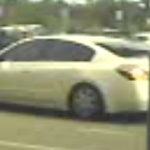 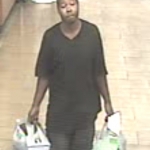 At about 9:54 a.m. the victim’s vehicle was parked on the 400 block of East 49th Street. Her purse was left inside of the car and visible from the vehicle’s exterior. A window was broken. The purse was taken.

An hour later the victim’s stolen credit card was used in a purchase at Walmart on Montgomery Cross Road. Within minutes, the card was used again for a purchase at Walmart on Highway 80. The fraudulent purchases totaled several thousand dollars. That day three additional transactions were attempted with the victim’s stolen card.

The suspect was captured on surveillance footage during one of the transactions. He is described as a black male in his late 20s to early 30s. He stands about 5-10 and weighs roughly 150 – 170 pounds. During the incident he wore a black shirt and black shorts. The suspect may have fled in a white 2010 Nissan Altima, with dark tinted windows and factory-issued rims.