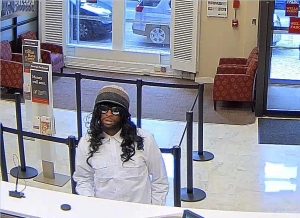 The suspect is described as a black male with a dark complexion, wearing a white T-shirt under a white long sleeve shirt and dark-colored pants. During the robbery, the suspect wore a black curly wig and large-frame women’s sunglasses. He is approximately 6-feet tall and walked with a limp. The suspect also has visible facial scarring.

The suspect fled the scene on foot, traveling west on York Avenue.

Anyone with information about this case should contact the SCMPD tip line or the FBI. The SCMPD tip line is open directly to investigators by dialing (912) 525-3124. The FBI Savannah office can be reached at (912) 790-3100.