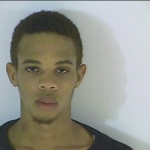 SAVANNAH, GA (November 20, 2014): Savannah-Chatham Metropolitan Police are seeking a Savannah man after a 6-year-old girl was shot in a domestic dispute this morning.

Brandon Maurice Stewart, 20, is being sought after Violent Crimes detectives determined that the child was shot during a domestic dispute between him and the child’s mother.

Shauneequa Jones, 22, had called police to Wheaton Street near East Broad Street about 8:44 a.m. Thursday. She reported she was walking her daughter to school and heard a noise before her daughter complained and she discovered the child had been shot. Police searched their apartment nearby on Wilder Street and discovered the shooting actually took place there.

While detectives continued their investigation into the shooting, Police Chief Joseph H. Lumpkin Sr. issued a warning for adults who keep weapons in a residence with children and those who knowingly live with individuals legally prohibited (convicted felons, etc.) from possessing weapons.

“The Second Amendment right to bear arms is accompanied by the responsibility to use due care,” he said. “This is particularly important in situations where children are present. This current situation easily could have become a tragedy from which many would never recover.

“Parents also should be wary of living with felons possessing firearms. Convicted felons have forfeited the right to bear arms and the fact that they have weapons should be a strong indication that they cannot be trusted, particularly with your child’s safety. Anyone who knows of such a situation should report it to police immediately.”