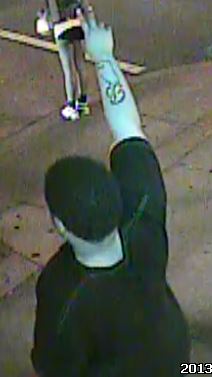 TATTOOED MAN NO LONGER SOUGHT FOR QUESTIONING BY SCMPD

NO LONGER SOUGHT FOR QUESTIONING BY SCMPD

UPDATE:
NOTE: The man sought in the release below responded to Metro Police detectives and is no longer being sought.

Thanks to all media outlets who helped in this case. Additional requests to find potential witnesses are expected.
—
SAVANNAH, GA (May 6, 2013): Metro Violent Crimes detectives are seeking a man for questioning in the shooting of two people on West Broughton Street Friday morning.

Savannah-Chatham Metropolitan Police would like to talk to the black male in his late teens or 20s with short, curly hair and a slight goatee and an unusual large tattoo on his right forearm.

As many as 100 people were present near Broughton and Jefferson streets as the confrontation took place about 3 a.m.

Anyone with information on the case, the identity or the location of the man is asked to call Crimestoppers at (912) 234-2020 or text CRIMES (274637). Tipsters remain anonymous and may qualify for a cash reward.