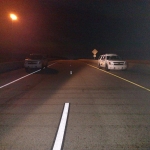 SAVANNAH, GA (November 24, 2016): Savannah-Chatham Metropolitan Police Department’s Major Accident Investigation Team (MAIT) responded to a single-vehicle accident on the Veterans Parkway that resulted in the death of a Ahmed Ibrahim on Thursday, Nov. 24.

At about 3:50 a.m. Metro responded to the scene, locating Ibrahim and his vehicle. Ibrahim was driving south on Veterans Parkway in a black Chevrolet Silverado Extended Cab. Investigators believe that while on the exit ramp to eastbound Highway 204, Ibrahim struck the inside median wall. Ibrahim was not wearing a seatbelt and was ejected from the vehicle. He landed in the northbound lanes of Veterans Parkway. Ibrahim was transported to Memorial University Medical Center, where he died.

Investigators believe speed may be a factor in this collision.