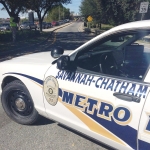 Evegan, died at the scene. Investigators believe speed may be a factor in this collision.