SAVANNAH, GA (July 29, 2015) – This afternoon the U.S. Bureau of Alcohol, Tobacco and Firearms presented an award to the Savannah-Chatham Metropolitan Police Department for its successful use of the National Integrated Ballistic Information Network (NIBIN).

NIBIN is a national law enforcement database of digital images of spent bullets and cartridges that are found at crime scenes or test-fired from confiscated weapons. 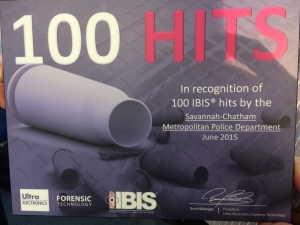 Forensics detective APO Russell Champion manages the system. “This is about as CSI as you can get,” he said. “This is cutting-edge technology and we have it at this department. It is an important tool because it allows us to target violent offenders and gun-related crimes.”

Currently 180 agencies across the country are using NIBIN.