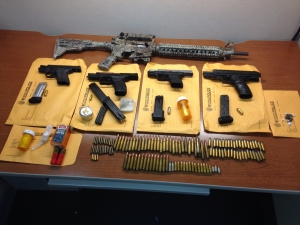 At approximately 4:30 p.m. on May, 20 officers from the UNIT observed the teens holding firearms while posing for photos on a park bench, then concealing them in their waistbands.

Officers seized four handguns, a rifle, marijuana, and several rounds of miscellaneous ammunition during the incident.