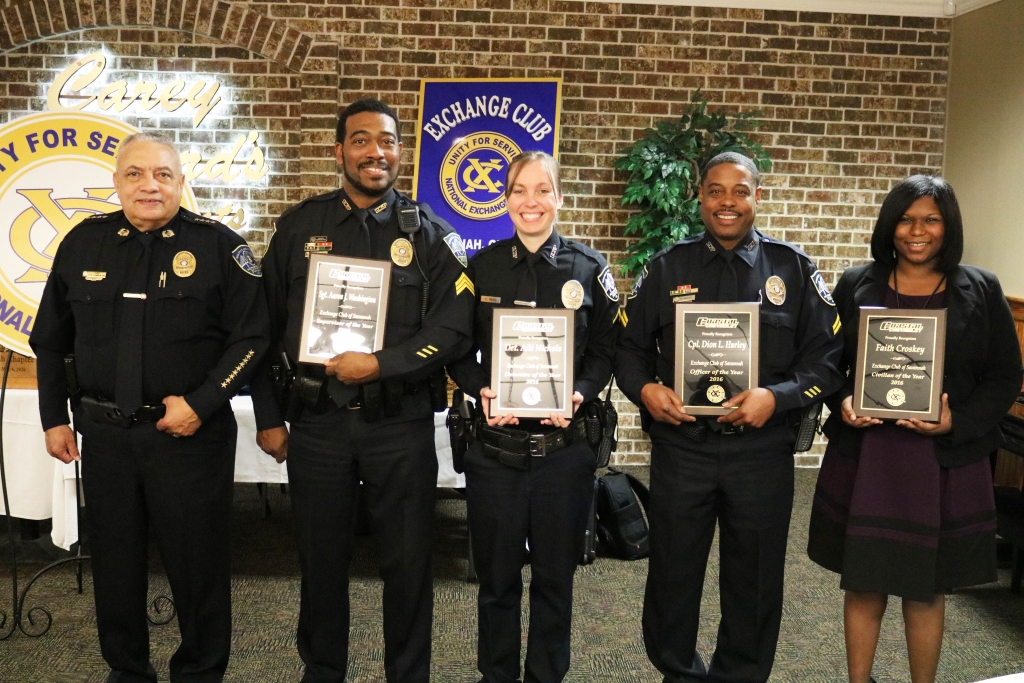 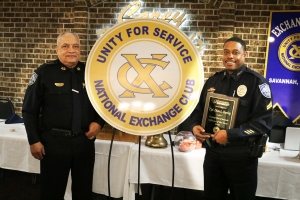 Officer of the Year, Cpl. Dion Hurley: Cpl. Dion Hurley stepped forward to join the SCMPD 18 years ago. He is currently assigned to the Southside Precinct and his primary responsibility is to build relationships with at risk juveniles who live in that precinct. Cpl. Hurley frequently visits all the schools on the Southside and is a positive role model for the thousands of children he comes in contact with.

Every summer Cpl. Hurley helps coordinate the SCMPD Police Activities League Youth Summer Camp which is a free summer camp for boys and girls ages 8-14. During the camp he teachers the youth about the importance of leadership and character and shows the children police officers are there to help them.

Southside Precinct Commander Ashley Brown said, “Hurley knows his job, he knows the kids in the precinct, and he knows how to use the resources we have available to us. He needs very little guidance and is self-motivated. I have even heard the command staff say that they wish all precincts had an officer dedicated to juveniles like Hurley. He does a fantastic job.” 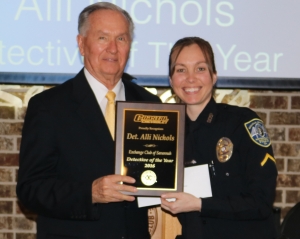 Detective of Year, Det. Alli Nichols: Detective Alli Nichols joined the SCMPD six years ago and has been assigned to the Violent Crimes Unit for three years. In that time, she has solved every homicide case in which she has been the lead, to include the triple homicide in Carver Heights in October 2015. In addition to solving these tough cases, she has won every murder in court that has gone to trial.

Nichols is always a team player in the office, helping others whenever help is needed. She continues to maintain an extremely positive attitude, despite many obstacles and the nature of this work. She consistently sees the best in people, both in her casework and as a coworker. Our unit, office, and department is a better organization because she is a part of it.

Violent Crime Unit supervisor Sgt. Robert Santoro said, “I would like to say that my nomination of Nichols over others in my unit speaks volumes about her. There are many excellent, hard-working investigators in this department. She has earned this award. 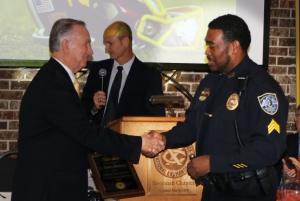 Supervisor of the Year, Sgt. Aaron Washington: Sgt. Aaron Washington joined the SCMPD 7 years ago. He is currently assigned to West Chatham Precinct. Many officers throughout the department consider Sgt. Washington a mentor – calling him dependable, knowledgeable and great a building relationship with officer and community members.

During Hurricane Matthew Sgt. Washington went well beyond his scope of a supervisor. He cooked foods for the officers on his watch and 911 dispatchers. He also made sure citizens in his precinct were getting the food and services they needed after the storm.
For the past several years Sgt. Washington has also worked with the Training Unit – teaching defensive tactics to new recruits and officers.

Cpl. Marcus Paige has worked with Sgt. Washington for years. “Sgt. Washington has always led by example. He has been one of the most influential people in my life and helped be achieve my careers goals of working in the Training Unit. He is a source of motivation and inspiration to many officers.” 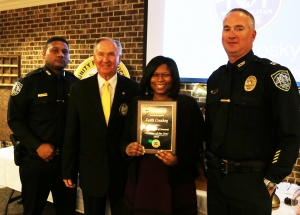 Civilian of the Year, Faith Croskey: Faith Croskey is an analyst for the SCMPD and came on board eight years ago. She is currently assigned full-time to the department’s End Gun Violence: Step Forward – which is an approach to combat groups and gangs involved in gun violence and provide assistance to those who wish to turn their lives around.

Croskey works closely with detectives, street officers and members of the SCMPD’s Savannah Area Regional Intelligence Center to identify group and gang members and create link charts which officers use to crack down on these dangerous individuals with a laser focus. She basically does everything but hit the street.

End Gun Violence Law Enforcement Coordinator Capt. Lenny Gunther said, “Croskey is a true professional. Her work ethic, dedication to our community, and professionalism are exemplary. Faith is a focal figure in SCMPD’s End Gun Violence initiative and her passion to eliminate violent crime in our city is witnessed on a daily basis. I’m extremely proud of Faith as so she is very deserving of being recognized for her hard work.”