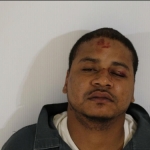 SAVANNAH, GA (December 17, 2014): A Savannah man faces multiple charges after striking two patrol cars and a motel building before colliding with a car carrying a woman and two children this morning.

Ronald Alfred Greene, 37, of the 11000 block of Largo Drive, was arrested by Savannah-Chatham Metropolitan Police after a foot chase and a struggle with officers who finally had to use pepper spray to subdue him about 2 a.m.

He has been charged with fleeing to elude, obstruction by fleeing, failure to obey traffic control devices, driving on a suspended license, driving without headlights and two counts each of striking a fixed object, interference with government property and leaving the scene of an accident.

The woman and two children in the Honda Accord he had struck escaped serious injury and were treated on scene by Southside Fire Emergency Medical Services. Two officers attempting to talk to him managed to avoid being struck by his car before it collided with both of theirs.

Southside Precinct Patrol officers had been searching for a vehicle reported leaving the area of auto break-ins in the Kensington Park neighborhood the previous night when they noticed an SUV matching the description parked at a motel on Stephenson Avenue about 1:56 a.m. Greene was asleep in the vehicle.

When officers tapped on his window, he awakened, started his car and backed into a patrol car. The Silver Toyota Rav 4 then struck the motel building, backed up, drove forward into a second patrol car and sped north  on Habersham Street without its headlights.

Converging officers located the Toyota on the lawn of a medical building at Habersham Street and Derrenne Avenue where it landed after colliding with a Honda and overturned several times. Greene, the loan occupant of the SUV ran from the scene and was apprehended after fighting with officers.

Greene has an extensive history of arrests in the Savannah area including multiple charges of entering auto, theft, burglary, probation and parole violations.