SAVANNAH, GA (September 2, 2015) –The Savannah-Chatham Metropolitan Police Department is taking pro-active measures to ensure all vehicles in the fleet can be properly secured.

Around noon on Monday, August 31 an officer secured her duty weapon in the trunk of her marked patrol car, a 2009 Ford Crown Victoria. The car was located at the corner of Liberty and Abercorn St. The officer left her vehicle to eat lunch at a nearby restaurant. Shortly after the officer walked away, the interior trunk release malfunctioned and the truck opened, exposing the duty weapon.

A vigilant citizen noticed the trunk pop open and attempted to close the trunk. Then he called 911. The citizen stood by the vehicle until officers arrived.

Upon examination by the City of Savannah’s Vehicle Maintenance Department, it was found that a brace was bent, causing the lock bar and the truck latch to misalign. Instead of the locking bar entering the center of the trunk latch, it was hitting the right side of the trunk latch. This would have caused the trunk latch to not fully engage when shut.
Additionally, the interior trunk release was disabled. Now the only way the trunk can be opened is with a key.

This morning, Chief Joseph H. Lumpkin, Sr. ordered that all trunk releases within the interior of police sedans be deactivated as soon as possible, beginning with the Ford Crown Victoria vehicles.

“Ensuring the safety of this community and our officers is paramount. We are acting out of an abundance of caution to ensure weapons and other police equipment does not fall into the wrong hands. I want to thank the citizen for his vigilance and for taking the proper steps to make sure this officer’s duty weapon was secured,” Chief Lumpkin said. 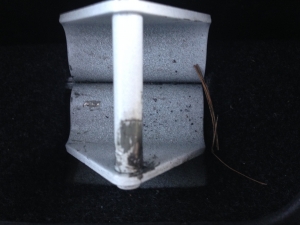 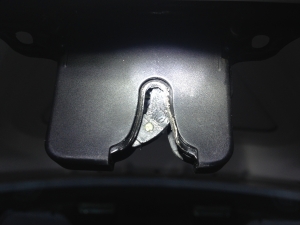