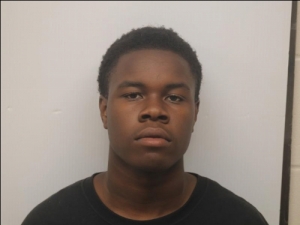 At about 3:40 p.m. Metro officers responded and observed the property damage at the scene. Violent Crimes investigators believe Glover fired the shots. Investigators also are working to identify a second shooter.

Glover is described as a black male standing 5-7 and weighing roughly 150 pounds. He has short black hair and brown eyes. Glover is known to frequent Savannah’s Westside. He may be in a blue Honda.

Glover is considered armed and dangerous. Anyone who sees Glover should call 911 immediately and avoid approaching him.

Glover and Brandon Miller, who was already arrested, face murder charges in the November shooting death of Mario Williams, 29 at a gas station on the 700 block of Wheaton Street.

Individuals with information on this case or Glover’s location should call CrimeStoppers at (912) 234-2020 or text CRIMES (274637) using the keyword CSTOP2020. Tipsters remain anonymous and may qualify for a cash reward.