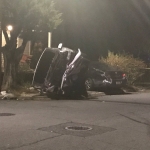 Metro responded to the scene finding an unoccupied 2010 Toyota Avalon and a 2005 Chevrolet Suburban that had collided. Singleton, who was the driver of the SUV, had been partially ejected from her vehicle. The Suburban had 6 passengers between the ages of 17 and 1. Singleton was transported to Memorial University Medical Center in critical condition along with her 6-year-old male passenger, who sustained serious injuries. A 13-year-old and a 9-year-old also were transported to MUMC with non-life threatening injuries. The three remaining youth were unharmed.

Preliminary investigation shows that Singleton was traveling east in the 2100 block of Alabama Avenue. An Avalon failed to yield at a stop sign at Alabama Avenue and New Jersey Street. The Avalon collided with Singleton’s Suburban, causing the SUV to spin and roll over.  The occupants of the Avalon fled the scene on foot without rendering aid to Singleton and her passengers.

Further investigation revealed the Avalon was reported stolen near LaRoache Avenue and LaRoach Count in the early morning hours of Nov. 30. MAIT detectives believe the Avalon was occupied by at least two suspects. One suspect is described as a black male, with an Afro haircut, wearing all black clothing. This suspect may be a juvenile.

MAIT continues to investigate. Anyone with information on this incident or the suspects should contact the SCMPD tip line by dialing (912) 525-3124.