SAVANNAH, GA (November 28, 2014): Savannah-Chatham Metropolitan Police ended a month-long search for a Savannah woman Thursday when they located and arrested her for two incidents in October in which a gun was fired at victims.

Shawntavius Shanell Butler, 19, of the 5200 block of Franklin Street, was arrested about 4:30 p.m. on two charges of aggravated assault filed by Metro violent crimes detectives. She also is being held for the McIntosh County Sheriff’s Office.

The first charge stemmed from a shots fired call on the 1300 block of Seiler Avenue about 5 p.m. Oct. 6.

In that incident, three women approached a 25-year-old woman at three different locations in an on-going dispute between Butler and the woman. In the second location, a tire was cut on the victim’s car.

The victim changed the tire and drove to Seiler Avenue where Butler and the women approached her again, fought with her and threw a drink on her. Butler then fired a hand gun at her and left after two more tires on the car were cut.

On Oct. 17, Butler and two other women drove by a house on the 1100 block of Collins Street just before 6 p.m., became involved in a conversation with a 29-year-old man, threw a drink on him and tried to pull him off the porch of a house. Butler then fired twice as he ran into the house. The two bullets struck the entryway of the house beside a room where two children, ages 10 and 11 months, were located. 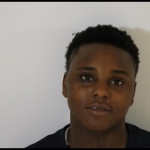 No injuries were reported in either of the incidents.