Christa Ross,15, and Malachi Butler, 16, both landed jobs at Chatham County’s Metropolitan Planning Commission (MPC) through the Savannah Pre-Apprentice Program. Both Ross, a 10th grader at Savannah Early College, and Butler, a Junior at Savannah High School were new to SPAP in 2016.

At MPC, Butler and Ross spoke to citizens, promoting bike safety and handing-out pamphlets pinpointing the county’s bicycle lanes as part of the Savannah Bike Campaign. They also were exposed to the Savannah Area Geographic Information System (SAGIS), used for computerized 3D mapping. Together they were responsible for scanning geographical maps of Savannah, including some dating back to the 1940s. Though this process takes several hours to complete, it is the part of the job that Butler, an aspiring videogame designer, finds most intriguing. 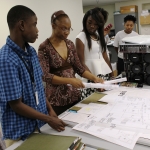 Ross, an aspiring fashion entrepreneur, learned that their historical map scans are useful to the local business community by allowing businesses to determine parts of town where expansion efforts are most beneficial. “What I enjoyed most about my job is that I learn something new each day,” said Ross.

Ross also learned that being prepared, punctual and professional are important soft skills needed at any job. She enjoyed working with MPC; and in 2017 she would like to try her hand at a job that would show her more about entrepreneurial endeavors in retail. Butler hoped SPAP will allow him to work at MPC again in the future. 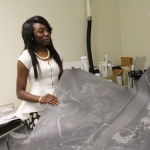 Not only was this Butler and Ross’s first year in the program, it also was their first job experience. Ross was nervous about coming into a new environment with new people. Those feelings faded when the MPC staff welcomed and immediately connected with the two apprentices.

“They feel like family,” said Butler explained. “When you feel comfortable, it helps you work better.”

MPC staff taught the apprentices that effective communication starts with good listening and that no question is a bad question.

Ross and Butler learned a lot at MPC and encourage other kids to participate in SPAP in the future.