Update: Jarquavious Pinkney, 18, turned himself into Savannah-Chatham Metropolitan Police headquarters on the evening of Jan. 9. Pinkney is charged with terroristic threats and criminal damage to property. He was transported to the Chatham County Detention Center without incident. 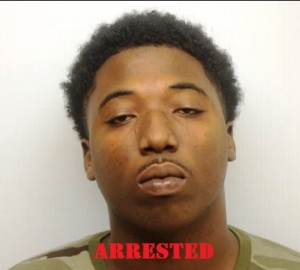 At approximately 10:57 am, Metro responded to the 1200 block of McCarthy Avenue for a domestic dispute that had just occurred. Jarquavious Pinkney, 18, reportedly threatened a member of his family with a gun. Pinkney fled the scene before police arrival.

SCMPD’s K-9, Aviation and Violent Crimes units responded to the scene to assist in the search. At this time, Pinkney has not been located. He faces aggravated assault, terroristic threats and criminal damage to property in the second degree charges.

Pinkney is known to frequent the Carver Village area. He was last seen on foot wearing a black and gray hoodie with blue jeans and what is believed to be a ballistic vest. He is 5 feet 11 inches tall and weighs approximately 200 pounds.

He is considered armed and dangerous. Police are asking the community to not approach, but call 911 if seen.

Anyone with any information on Pinkney’s whereabouts should contact 911 immediately.