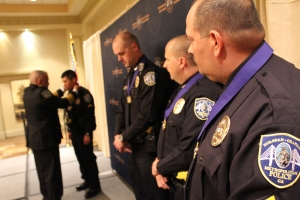 SAVANNAH, GA (March 23, 2016) – On Friday, March 25 the Savannah-Chatham Metropolitan Police Department presented dozens of awards to officers, civilian staff, and members of the community for their bravery, dedication and outstanding performance.

The awards ceremony and luncheon was sponsored by the Westin Savannah Harbor Golf Resort and Spa and General Manager Mark Spadoni.

Citizen Awards of Commendation were awarded to: