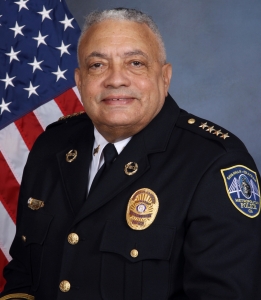 The course, which consists of three one-week instructional periods, is the FBI’s premier executive training initiative, providing training for FBI executives and heads of the largest law enforcement agencies in the United States and overseas. Lumpkin was nominated for the exclusive course by David J. LeValley, FBI special agent in charge of the Atlanta Field Office. Forty law enforcement leaders from across the world attended the session. Some of Lumpkin’s classmates included an assistant director of the FBI as well as four special agents-in-charge from major FBI field offices. Attendees typically lead departments with more than 500 officers and serve a population of 250,000 or more.

NEI is the most senior executive training session offered by the FBI. It emphasizes leadership, professionalism best practices and partnerships. Experts from across the public and private sector instructed on a wide range of topics including violent crime reduction strategies, terrorism, large event security considerations with multi-agency coordination, technology as a law enforcement multiplier, opiates and our communities, leadership and resilience, as well as how to care for police department employees.

Lumpkin officially graduated on Sept. 21. He joins more than 1,000 law enforcement executives who have graduated from NEI since 1976.