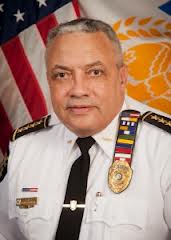 SAVANNAH, GA  (October 14, 2014) Savannah City Manager Stephanie Cutter today announced the selection of Joseph “Jack” Lumpkin as the next Chief of the Savannah-Chatham Metropolitan Police Department. He is scheduled to begin November 9.

“Chief Lumpkin brings proven leadership that exhibits standards of excellence in policing and qualities that will serve all citizens of Savannah and Chatham County with the utmost respect while helping to ensure that our streets are safe,” City Manager Stephanie Cutter said.

“In light of the upcoming negotiations regarding the SCMPD Intergovernmental Agreement, I feel satisfied that Chief Lumpkin will work towards the best interest of both the City and the County,” County Manager Lee Smith said. “It is the intent of Chatham County to supply the best police services possible in the unincorporated areas of the county while supporting the overall efforts of the police chief to re-establish the trust and faith of the citizens and businesses of our community.”

Chief Lumpkin brings 43 years of law enforcement experience to the position, including 17 years as Chief of Athens-Clarke County, where he has developed a reputation as one of the top law enforcement professionals in the Southeast. He holds a master’s degree in public administration, and is a graduate of the prestigious FBI National Academy.

This year, the Georgia Association of Chiefs of Police named Lumpkin “Chief of the Year” for his “continuous unfailing and wise counsel toward developing community awareness, deliberate dedication toward fair and impartial policing, and innovative public service delivery.”

He has used a community oriented policing approach in Athens-Clarke County (pop. 116,714) to drive down Part 1 crime more than 40 percent during his tenure in a county with one of the highest poverty rates in the nation.

“Chief Lumpkin has a strong grasp of the critical role of data and technology in targeting crime, while understanding that true public safety must involve a broad cross-section of community development efforts,” Cutter said. “He has the necessary experience, respect, and skillset to both restore integrity in a department going through significant transition, while ushering in a new era of public safety in Savannah-Chatham County.”

Acting Chief Juliette Tolbert, who did not apply for the position, has agreed to stay on during this period of transition.

“We would like to thank Chief Tolbert for her commitment, tireless efforts and extremely strong leadership over the past year,” Smith and Cutter said.

1975-1990: Progressed through the ranks, from Officer to Major, of Athens Police Department.