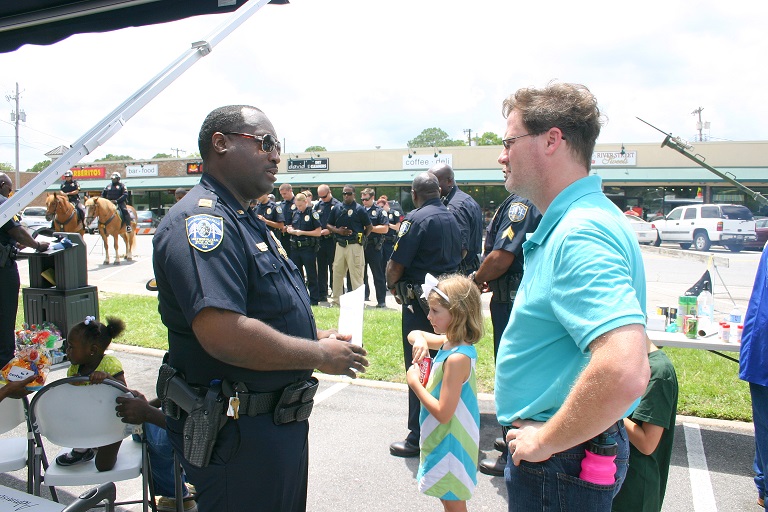 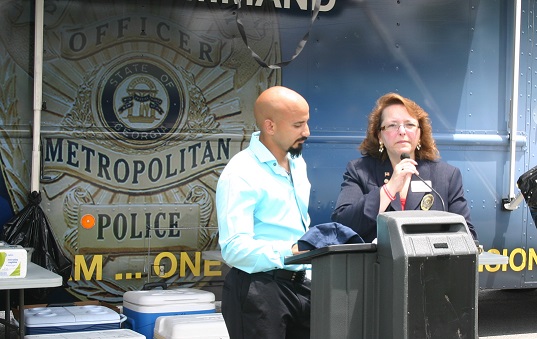 SAVANNAH, GA (June 22, 2013): Central Precinct officers of the Savannah-Chatham Metropolitan Police Department held their second Roll Call in the Street of the summer on Saturday, greeting dozens of residents as they began their afternoon shift.

The officers dispatched from the parking lot of Habersham Village, rather than their precinct office, to give residents and businesspeople a chance to see the resources deployed to protect them.

Besides the Patrol officers, residents saw mounted patrol officers on horseback, motor scooters and cycles, and a display of special operations resources.

Before they were dispatched, Certus Bank Assistant Vice President Tina Browning made two presentations to officers:

Precinct Detective Yidier Gonzalez was presented the first monthly Community Spotlight Hero Award by the bank. She said the award is presented to an officer who exceeds expectations and embraces the spirit of policing, and will be presented to other officers during the year.

She also presented the precinct commander, Capt. DeVonn Adams, with cases of toy bears to be placed in precinct patrol cars. Officers distribute the toys to children who get caught up in the drama of police situations and can be overlooked as adults with them address the issues of the incident. The bears were presented by Certus Bank and Barnett Educational Supplies.

Roll Call in the Streets was begun by Capt. Adams in 2012 as part of his All Hands on Deck operation in response to Police Chief Willie Lovett’s charge to fight the annual increase in crime during the summer months when teens are out of school. The operation was successful in cutting crime numbers reported in the precinct to 30 percent below 2011 numbers.