SAVANNAH, GA (April 21, 2015) A continuing investigation by Metro’s newly assigned drug unit into the actions of a Savannah businessman selling, illegal military weapons to convicted felons has led to the seizure of a large cache of stolen munitions.

They also recovered 158 Small Arms Protective Inserts (SAPIs) and 19 military vests to carry them. The plates, which are used to devise bullet-proof vests, are highly guarded by the U.S. Army and are never to be taken out of military areas.

The probe was launched by ATF against Wesley Defreitas and his company Warriors Gear on the 5500 block of Montgomery Street, just outside a gate of Hunter Army Air Field. Defreitas was charged with illegal sales of weapons by federal agents last year and was out on bond after a federal indictment when ATF, UNIT and SCMPD Explosive Ordnance Device (bomb) Unit officers raided a storage building on April 2.

UNIT, ATF and Department of Defense investigators are working in unison on the investigation in hopes of determining if any more weapons exist and their origin.

“Weapons this destructive never were meant to be in the hands of civilians and should have been tightly controlled at all times,” he said. “Our understanding is that they were being sold to convicted felons and others in whose hands they would have constituted serious danger to the public. We may never be able to determine how many lives this joint operation may have saved.” 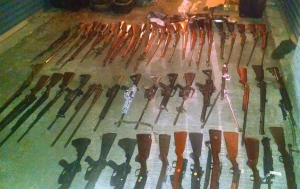 The investigation into the operation is continuing and additional charges and arrests are expected.