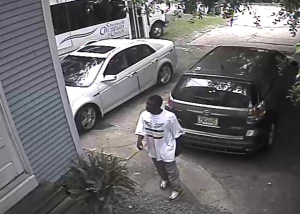 The suspect is described as a black male wearing a white T-shirt and gray jeans. The stolen vehicle was later located in the 700 block of East 37th Street.

This case remains under investigation. Anyone who recognizes the suspect should call the SCMPD tip line is open directly to investigators by dialing (912) 525-3124.