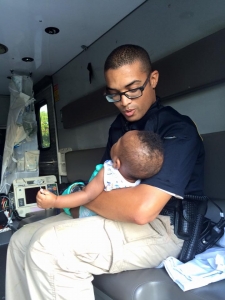 SCMPD Officer Omar Fernandez consoles the missing baby in the back of a Southside Fire EMS ambulance.

SAVANNAH, GA (July 12, 2016) – Savannah-Chatham Metropolitan Police safely located a six-month-old boy and a 13-year old female who were missing in a wooded area this morning in Liberty City.

Around 4:30 a.m. officers were dispatched to a robbery/carjacking. West Chatham Precinct officers spotted the vehicle.  When they attempted to stop the driver, the driver fled, crashing at the intersection of Staley Avenue and Liberty Parkway.

Officers observed Davontay Jones 19, run into the woods with the baby.  Officers found and arrested Jones around 6:00 a.m.  Other officers found the infant two hours later, alone, near a fence line, behind a shed.

The female teen was located by a passing motorist just before 10 a.m. Both the infant and teen were transported to the hospital for medical evaluation.

Detectives believe the 13-year-old female lured a man to her residence under false pretenses.  When the victim arrived, she met him out front with her baby brother and her older brother.  The victim gave them a ride.  When the victim stopped to let them out, Jones assaulted the victim. Following the altercation, Jones took the victim’s car and fled the scene with his siblings.

Anyone with additional information about this case should contact SCMPD.  You can call 911 or the SCMPD tip line. The tip line is open directly to investigators by dialing (912) 525-3124.