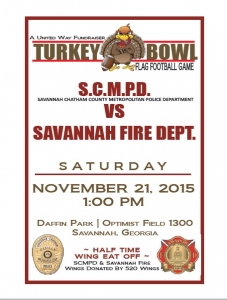 SAVANNAH, GA. (November 18, 2015): Members of the Savannah-Chatham Metropolitan Police Department and Savannah Fire and Emergency Services will face off in the Second Annual Turkey Bowl in support of the United Way of the Coastal Empire.

The flag football game is set for Saturday, Nov. 21 at 1 p.m. at the Daffin Park Optimist Field, located at 1500 E. Victory Dr. The event is free and open to the public. Monetary donations are encouraged for entry into the game. All proceeds will benefit the United Way.

During halftime, police officers and firefighters will face off in a wing-eating contest sponsored by 520 Wings. The winner will receive a medallion and bragging rights for an entire year.

Currently, SCMPD holds the trophy for last year’s football game. The winning agency of this year’s match up will also receive a Turkey Bowl trophy.

In 2015, Metro has collected more than $25,000 for United Way through various department activities. The Savannah Impact Program (SIP) office, located at 1700 Drayton St., will accept monetary donations for United Way until Monday, Nov. 30.