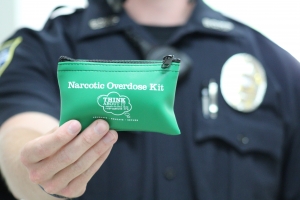 Naloxone is an “opioid antagonist” used to counter the effects of opioid overdose, for example morphine and heroin overdose. Specifically, naloxone is used to counteract life-threatening depression of the central nervous system and respiratory system, allowing an overdose victim to breathe normally.

More than 370 officers participated in training this week and learned how to administer naloxone, a nasal spray that helps reverse the effects of an opioid overdose.

“This is important because it’s another opportunity to save someone’s life,” said Capt. Ben Herron, Downtown Precinct commander. “Sometimes we get to the scene faster than EMS, so now we can take action immediately and save someone’s life.”

Each officer at the training sessions received a small green pouch containing the life-saving drug. The medication was made possible by a grant from the Medical Association of Georgia Foundation, Inc., based in Atlanta.

SCMPD is the first law enforcement agency outside of 13 North Georgia counties to receive the naloxone kits provided by MAG. The MAG Foundation covered the nearly $16,000 cost to provide 400 kits, which is roughly $40 per dose. The product has already proven useful since its introduction to law enforcement agencies in the fall of 2015.

This initiative is part of Project D.A.N., or Deaths Avoided by Naloxone, according to Lori Murphy, director of program development for the MAG Foundation.

“It’s recently being given to police officers and the police officers are being trained because oftentimes they’re the first to respond,” Murphy said. “At this point, it’s been successful. We’ve already had seven overdose reversals.”

In addition to naloxone training, Project D.A.N. also taught the officers about Georgia’s medical amnesty law, which provides certain legal protections to officers who administer the drug to overdose victims.   Project D.A.N. is part of a bigger awareness campaign called “Think About It,” which is aimed at preventing prescription drug abuse. To learn more about the campaign, visit www.rxdrugabuse.org.