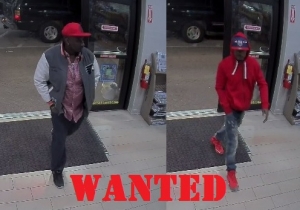 SAVANNAH, GA (Dec. 5, 2017) – The Savannah-Chatham Metropolitan Police Department Downtown Precinct detectives are asking for the public’s help identifying two suspects in the theft of a purse at the Barrel House on the 100 block of Congress Street on Nov. 24.

At around 4:45 a.m., Metro officers responded to the location and determined that the victim’s purse was stolen from behind the bar. The victim’s card was later used at a few gas stations in the area.

Anyone with information on the suspects’ identities or this incident is asked to contact police. A line is open directly to detectives at (912) 525-3124.