Beginning today, the department will issue a 9 p.m. nightly reminder, called #NightlyLockup, on its Twitter and Facebook accounts for people to remove their valuables from their vehicles and make sure the doors are locked. Other departments across the country have seen success from similar nightly social media reminders.

“We understand that sometimes people are busy and just forget to lock their doors when they get home,” said Assistant Chief Robert Gavin. “The goal of this campaign is to get people in the habit of securing their vehicles and removing their valuables each night.”

This year, there have been 1,742 entering auto cases, an increase of 112 from last year. Last week there were 42 reported cases. Of those, only two victims reported their vehicles were locked.

There have also been 775 auto thefts this year, which is an increase of three from 2016. Last week there were 23 reported cases. Eleven of those were unlocked and/or had keys left in them. Some of the victims admitted they leave spare keys inside their vehicles, which officers always advise against. Six of the 23 involved motorcycles or other circumstances.

The majority of these crimes are crimes of opportunity. One of the best ways to prevent entering auto and auto theft is to remove your belongings, take your keys and lock your doors.

“It’s all about eliminating the opportunities,” Gavin said.

Police advise that people never leave their vehicles unattended or running for any amount of time. Officers frequently see cases where vehicles are stolen while left running to “warm up” on cold mornings or at locations, like gas stations, where they only expect to be away from the vehicle for a few minutes.

The #NightlyLockup reminder will run for the foreseeable future. 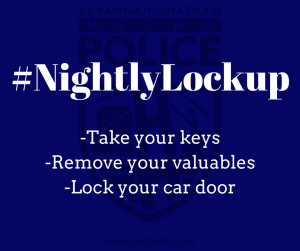