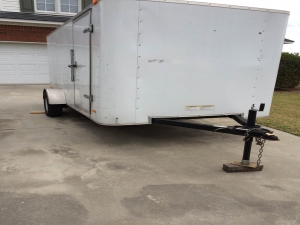 SAVANNAH, GA (April 6, 2016):  The Savannah-Chatham Metropolitan Police’s Southside Precinct detectives are investigating four trailer thefts this month, with two of the most recent occurring in the broad daylight, April 4, on Abercorn Street.

At approximately 2 p.m., April 4, in the 11100 block of Abercorn an enclosed trailer containing various types landscaping equipment was stolen from a retail parking lot.

At approximately 3:30 p.m., also April 4, an empty trailer was stolen from a bank parking lot in the 7800 block of Abercorn Street while the victim was inside the bank.

Both of these stolen trailers were hitched to vehicles and secured with a lock, but that isn’t always the case when it comes to stolen trailers. Many modern trailers are light weight and can become an easy target for thieves. If a trailer is not properly secured, it can literally be gone in a matter of seconds.

Police officials urge citizens not to leave trailers or other equipment unattended and to properly secure them when they are not in use. Locks on the hitch, trailer tongue, and even wheels may also help prevent trailer theft. Owners should also record their vehicle identification number (VIN) to provide to police in the event it is stolen.

Because these are cases occurred during daylight hours at busy locations, anyone witnessing suspicious activity should call police immediately.

These investigations are ongoing. Anyone with additional information should call CrimeStoppers at (912) 234-2020 or text CRIMES (274637) using the keyword CSTOP2020. Tipsters remain anonymous and may qualify for a cash reward.