UPDATE: Savannah-Chatham Metropolitan Police Department officers have recovered a stolen truck and trailer containing approximately $400,000 worth of movie production equipment. Thanks to a citizen’s tip, the vehicle was located at approximately 10:30 p.m., May 25, near the intersection of Paulsen Street and Wolf Lane. Detectives are working to identify a suspect in this ongoing investigation. 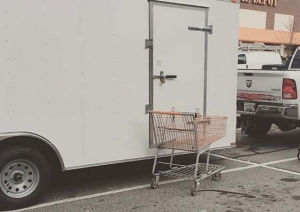 SAVANNAH, GA (May 25, 2016):  Savannah-Chatham Metropolitan Police Department Central Precinct detectives are investigating an auto theft that occurred at approximately 3:30 a.m., May 25, near the intersection of E. 48th Street and Bull Street.

The stolen truck is a white, four-door 2014 Dodge Ram 4×4 with Tennessee license plate number EF3723. An enclosed, white 2016 Cynergy trailer attached to the truck, which contained various types of movie production equipment, was also stolen. Detectives believe the suspect may have hit a 2001 Toyota Tundra in the area as he fled, so there may be body damage to the stolen vehicle or trailer.