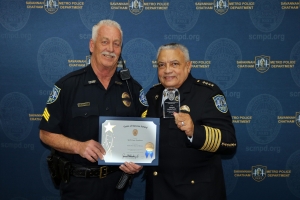 SCMPD recognizes Sgt. Gene Lawhorn for 35 years of service with the department.

The 75 men and women represented nearly every facet of the police department including patrol officers, investigators, communications officers, special operations personnel, administrative assistants and much more. The ceremony took place at 2:00 p.m. at the SCMPD’s Professional Development Center at 3401 Edwin Street.

Chief of Police Joseph H. Lumpkin, Sr. praised the officers and employees for their dedication to the citizens of this community. “You are the guardians of democracy. You are the ones who make a difference every day in this city and county.” Lumpkin added, “Many of the employees being honored today have served this community for decades and are now helping us lead the way in the 21st century.”

The following employees were honored: