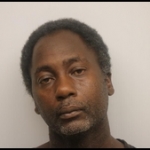 SAVANNAH, GA (July 27, 2016): Kevin Mitchell, 43, is wanted for questioning by Savannah-Chatham Metropolitan Police detectives regarding a July 27 gun discharge incident at a residence on the 200 block of West 55th Street.

At about 2:15 a.m., Metro responded after reports that multiple gunshots had been fired into the residence. Reportedly, the house was occupied by five residents, including two children when the incident occurred.

Mitchell is described as a black male, standing 6-1 and weighing about 160 pounds.

Anyone with information about this case or Mitchell’s location should contact the SCMPD tip line by dialing (912) 525-3124.