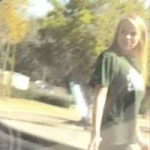 Do you know this person of interest?

SAVANNAH, GA (March 9, 2016): Savannah-Chatham Metropolitan Police Department’s Robbery Unit asks the public’s help in locating and identifying a person of interest who may have knowledge of a recent robbery by sudden snatching and gun discharge at Savannah Mall, located on the 14000 block of Abercorn Street.

Surveillance images captured at the time of incident show a subject described as a white female in her late teens. She has medium length blonde hair and has a slender to average build. During the incident she wore a green shirt with white print.

March 3, at about 1:54 p.m. Metro responded to the food court, where officers made contact with Nicholas Rivera, 28. Rivera was reportedly robbed while attempting to sell a laptop computer he advertised on Craigslist to the suspect who posed as a buyer. The suspect reportedly grabbed the laptop, before running out of the food court with Rivera trailing behind him.

Once outside, Rivera fired one warning shot into the air. No injuries were reported. The suspect entered a gray sedan occupied by three other individuals. The sedan fled toward Highway 204.

The robbery suspect remains at large and is described as a black male with a dark complexion, possibly in his late teens to early 20s. The suspect was clean-shaven with his hair styled in twists or a short afro. During the incident he wore a black jacket and blue jeans.