Man in Cubbedge Street Sexual Assault Sketch NOT a Suspect

SAVANNAH, GA (August 30, 2016): Upon further investigation, Savannah-Chatham Metropolitan Police Department’s Special Victims Unit has conclusively determined that the person depicted in the sketch related to the sexual assault of a young girl in the Carver Heights neighborhood on Aug. 22,  is NOT a suspect in that crime.

The sketch, originally released on Aug. 23, depicted this man below. 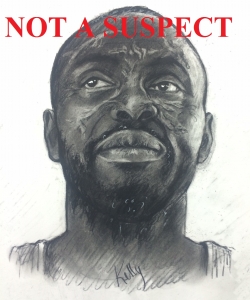 This man is NOT wanted as a suspect by SCMPD for any criminal activity.

The investigation into the events that surround the reported sexual assault of the young girl on Cubbedge Street remains open and active.

Anyone with any information in this case should contact the SCMPD tip line by dialing (912) 525-3124.