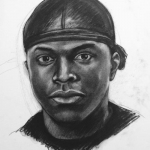 SAVANNAH, GA (October 28, 2015): The Criminal Investigations Division of Savannah-Chatham Metropolitan Police Department has released a composite sketch of the suspect wanted in a sexual assault that occurred at about 6 a.m. on Wednesday, Oct. 21 on the 100 block of West Duffy Street.

Investigators ask the public’s help in identifying the suspect described as a black male with a dark complexion, standing about 5-6 to 5-7 and weighing roughly 140 to 160 pounds. He appears to be in his early 30s. During the incident he wore a long sleeve shirt, camouflage pants and rust-colored work boots. Investigators believe the suspect was in the vicinity between 3 a.m. and 8 a.m.

Anyone with information on this suspect’s identity or location should call CrimeStoppers at (912) 234-2020 or text CRIMES (274637) using the keyword CSTOP2020. Tipsters remain anonymous and may qualify for a cash reward.